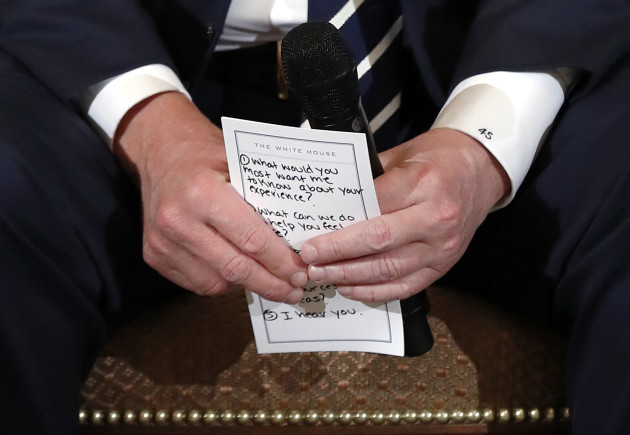 US PRESIDENT DONALD Trump has been criticised for holding notes reminding him to say ‘I hear you’ as he listened to students who survived last week’s mass shooting at a Florida school.

During the meeting at the White House, students from Marjory Stoneman Douglas High School called on Trump to tighten gun controls.

“We’ll be very strong on background checks, very strong emphasis on the mental health of somebody,” Trump told them. He also said that arming teachers was a possibility.

It’s called concealed carry. Where a teacher would have a concealed gun on them, they would go for special training and they would be there, and you would no longer have a gun-free zone.

“There are many ideas that I have, many ideas that other people have and we’ll pick out the most important ideas and work to get them done. It won’t be talk, it’s gone on too long,” Trump stated.

Journalists and viewers watching the meeting noticed Trump holding notes, one of which said, ‘I hear you’.

Other cues included the following questions :

Some people criticised Trump for needing the notes, particularly the one to remind him to say he was listening. 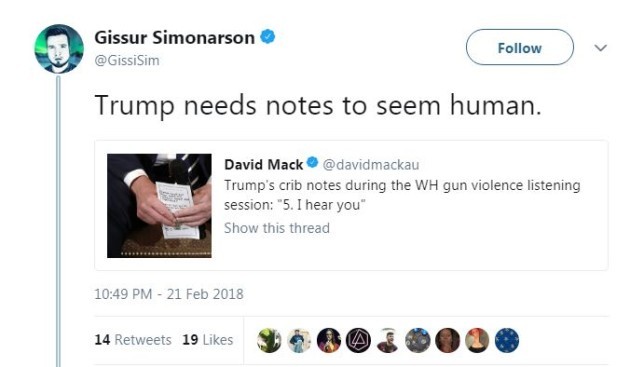 Others defended him, saying it’s common for people to bring reminders to meeting such as these. 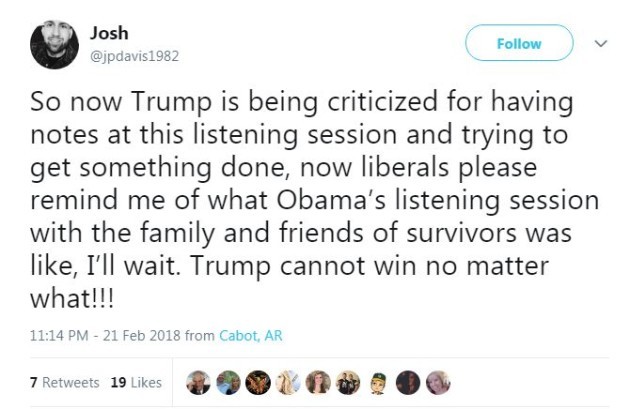 Nikolas Cruz, 19, killed 17 people at his former school on 14 February. The FBI admitted last week that it had received a warning in January from a tipster who said Cruz could be planning a mass shooting, but that agents failed to follow up.

There have been 18 shootings at schools in the US since the start of the year – about three per week.

Trump, like many politicians in the US, has received funding from the powerful National Rifle Association. As a result, many politicians are reluctant to bring in tighter gun control laws, despite the high level of gun violence and mass shootings.

In addition to the FBI’s missteps, Cruz was also known to local police after his mother repeatedly reported him for violent outbursts.

Meanwhile, records obtained by the South Florida Sun Sentinel show authorities investigated Cruz in 2016 after he cut his arms on messaging app Snapchat and threatened to buy a gun.

The newspaper, citing Department of Children and Family Services documents, said the investigation came four days after Cruz turned 18 — legally an adult and thus able to buy a firearm.

Investigators said there were “some implications” for the teenager’s safety, but concluded that his “final level of risk is low as (he) resides with his mother, attends school and receives counseling” as an outpatient at a mental health centre, the Sun Sentinel said.

Cruz later passed a background check, allowing him in February 2017 to buy the AR-15 rifle used in the massacre.

Explainer: What is the current situation with Covid-19 in nursing homes in Ireland?